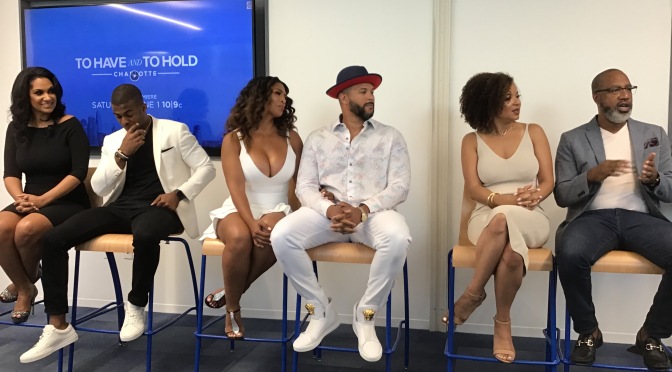 To Have and to Hold is a great example of what happens when too many couples intermingle too often. If you haven’t been watching the show you should go to on Demand for shows on the OWN Network and definitely catch up. For those of you who have been paying attention we probably can all agree that it was time for ish to hit the fan. Let’s get into Alane first.

Alane is the perfect example of why no matter how much your friend (Peter) complains to you about his/her relationship, you should just NOT get involved periot! It WILL Always come back to bite you in the butt, and then you will be looking like the one with the problem (attitude) like Alane did. #EpicFail Alane. Also,  whenever you bad-mouth your situation to another person it’s almost like you are giving that person ammunition to show out on your behalf. Simply because a real friend  will feel like they are speaking up for you because you are too weak or afraid to hurt someone’s feelings. But really you look like the overbearing friend putting your nose into business that is NOT yours. It’s NOT your relationship and NOT your business. Stepping away and leaving it alone is the best move.

About Ursula and Mr Douglas:

Hmmmmm, it’s absolutely awesome that Ursula has entered the chapter in her life where she is an empty-nester and wants to build an empire of her business. This is great, however it seems like Mr. Douglas has questions. Maybe he is just thinking where exactly does this leave him? Why is his wife determined to grow this business outside of Charlotte? Will she consider his feelings on the subject matter? These are all important great points because they are not just in a relationship but they are married!  Charlotte is a great expansion city, growing bigger each year. There is a saying that you should be able to be a STAR in your own land first! Has Ursula truly maxed out in Charlotte?

If Ursula could be a star in her own land she could grow her business nationally without stepping one toenail outside of Charlotte; so perhaps she can get the help she needs to develop a better business growth plan. Besides, when you get married your first commitment is to your spouse. (Unless thing changed something in the marriage handbook that I’m not aware of. They should see how to meet each other in the middle. That’s just my two cents unsolicited of course.

David for one wanted to save his marriage (so it seemed) and was totally not in favor of them living a part not for one day. Tyyawdi is too willing NOT to work this out. I imagine there is just nothing worse than a woman that’s fed up. It does look like Tyyawdi has a soft spot when it comes to their boys. She has to tell them why their Daddy won’t tuck them in at nighttime every night. As long as they can understand why then there shouldn’t be any problems. David seems like the type of man that will do right by his boys and if Tyyawdi was serious about keeping her family together I am sure he would be willing to give it a chance.

My guess is he will begin dating and actually enjoy the female attention. Hopefully Tyyawdi already has a new man because unless she plans on being a sugarmama I’m not too sure the dating world will be too favorable to a divorcee with two little boys and an ex husband that still cares deeply for his family. However, I’ve been known to be wrong before. This is going to be interesting to see how this all plays out.

Perhaps the best thing Juliana could do at this point is taking the first step to remove herself from being so to attached to Peter and his new better half. Helllllooooo Juliana you are the third wheel!  If she feels changing her last name will be part of her first move then at least it’s a start. I think all the drama has her realizing she is an official 3rd wheel. The problem is that the guys keep reassuring her that they are all one big family when really they should be honest and just let her know they want their own space.

Alane, even though she has been overstepping her boundaries she only has been trying to help her friend. What Josh doesn’t realize is that he is giving Alane a license to be disrespectful when he voices his disdain with his ex. He should man up and tell his ex himself to eliminate the drama and should also care enough about his friend Elaine to have her to not look crazy.

Juliana is going to have to expand her friend list outside of the innercircle of her ex husband’s friend circle. That’s the only way she is going to break this vicious cycle. Perhaps with Josh popping the question and them deciding to get married she will realize that 3 is a crowd. It’s just time to cut the embilical cord Juliana and that’s a fact.

Seems like Christina & Darhyl still has that high school/college love that’s just never ending. It showed maturity on Christina’s part to give Alane her own personal invite to the party since she expressed in the past how it was important for her to be invited outside of her husband’s friendship. Christina is living her best life and if her husband wanted to give her money as a gift and she wanted to make it rain on her on head then she should not be judged! It’s her party and she should enjoy her party however she wants.

I can’t wait to see what next week’s episode drama will bring. But what I am waiting for most is to see how Tyyawdi reacts when her husband finds real love and a woman that melts when he walks in the room.

Check out To Have and To Hold Charlotte at 10/9C every Saturday night on the OWN TV Network.