Todd Chrisley Firm in his statement “We Did Nothing Wrong” 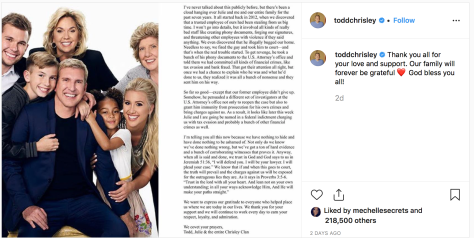 The person I feel for the most is Chase who’s the son of Todd Chrisley because he was well promoted on the show “Chrisley Knows Best” on the USA channel and he’s  a young man who’s probably utterly embarrassed with all these allegations going on against his parents. For the sake of the children I hope Todd is correct in his claims that all of these allegations of deceitful discretions of being charged with tax evasion, wire fraud, conspiracy to commit bank fraud and conspiracy to defraud the United States is all due to a disgruntled ex-employee’s dastardly ways.

Us Weekly shared how Todd took to social media to alert fans of what was soon to come.

“I’ve never talked about this publicly before, but there’s been a cloud hanging over Julie and me and our entire family for the past seven years,” the Chrisley Knows Best star, 50, wrote on Instagram on Monday, August 12, mentioning his wife of more than two decades.

He went on: “It all started back in 2012, when we discovered that a trusted employee of ours had been stealing from us big time. I won’t go into details, but it involved all kinds of really bad stuff like creating phony documents forging our signatures, and threatening other employees with violence if they said anything. We even discovered that he illegally bugged our home.”

But “the real trouble started” after the family fired the man, Todd wrote in the post. “To get revenge, he took a bunch of his phony documents to the U.S. Attorney’s office and told them we had committed all kinds of financial crimes, like tax evasion and bank fraud,” he claimed. “That got their attention all right, but once we had a chance to explain who he was and what he’d done to us, they realized it was all a bunch of nonsense and they sent him on his way.”

A federal grand jury in Atlanta issued a 12-count indictment against the Chrisley Knows Best  couple on Tuesday, August 13, U.S. Attorney Byung J. “BJay” Pak told reporters. Accountant Peter Tarantino was also charged in the indictment, accused of conspiracy to defraud the United States and aiding the filing of a false tax return. The couple surrendered to authorities and were taken into custody on Wednesday, August 14. After their arraignment, they posted bond and subsequently exited the Atlanta courthouse.

Then, however, the man “persuaded a different set of investigators at the U.S. Attorney’s office not only to reopen the case but also to grant him immunity from prosecution for his own crimes and bring charges against us,” Todd wrote.

“As a result, it looks like later this week Julie and I are going to be named in a federal indictment charging us with tax evasion and probably a bunch over other financial crimes as well,” he concluded. “I’m telling you all this now because we have nothing to hide and have done nothing to be ashamed of. Not only do we know we’ve done nothing wrong, but we’ve got a ton of hard evidence and a bunch of corroborating witnesses that proves it.”

According to Fox 5 News as of August 14th the couple bonded out on a 100,000 bond after the indictment. They cooperated with the authorities and stand firm in their word about their innocence.

@planetzane book Vengeance is available on audiobooks and you can get a free book with their trial offer. Check it out ! Tell em Jojondeezstreets sent you 😂😂😂
#repost @chakabars
#TiffanyHaddish is dropping a new song called “Come And Get Your Baby Daddy” 😂 repost @thejasminebrand
Repost @cardib How I been feeling all day ..Paranoid and annoyed
A word from ya boy DP aka D Pickett @totalsourceconsultants this is the perfect time to make sure your credit is good. Your cash can only go so far if you can’t even go to work. Put that stimulus check to use. (Did I misspell stimulus🤔 view the long version on @jonellprbrand and if you just lazy. .... call your creditors. Just call them
Dope
Yesss @msrikki and those 👠 are everything. #Repost It was such an honor to be featured in @televisionacad EMMY magazine. Pick up a copy!! #MeAndMyEmmy Christina is such a dope Photographer.... I can’t thank you enough #Repost @gandolphoto ・・・ Thinking back on how much has changed (personally, collectively) since these now-published images of Emmy (and Grammy)-winning producer Rikki Hughes @msrikki were shot back in mid-Dec for @televisionacad. Grateful for all the times I have a chance to get out and do something I love and meet others who are doing the same. Thank you to @rosecefalu @bleiweissdesign for the opportunity + @mplightlife for the assist. ❤️ MUA: Patrick Johnson Hair: @nikkiscottsalon #BeTheMagic @magic_lemonade
Mannnn who tuned in to @bravo tv tonight to see #RHOA That @neneleakes brought Lenethea out ooooh Chile now we see why she gets the Big Bucks! She got the whole Nations’s attention and we prob will be all shut in all week to watch it over and over again @thejasminebrand be on it ✔️
@drferguson_critterfixer @drhodges_critterfixervet #critterfixervets @natgeowild sat nights 10pm or @amazonprimevideo @rollingout https://www.2chicswitamic.com/post/are-insecure-women-easily-controlled-or-too-controlling-what-do-woman-want
Follow The Producer's Channel on WordPress.com