Dr. Heavenly Kimes (Bravo Network – Married to Medicine Reality TV Star) hosts a private screening of Black & Blue along with her Dentist Dr colleagues from Los Angeles. The colleague Dr. Ijeoma Igwe just happens to be Tyrese’s favorite dentist. Especially since she played it forward during the opening week of the movie Black and Blue she went viral for buying out an entire 300 seat movie theater for the children in the community. Amazing! Dr Heavenly also played it forward by buying out a screen at the Phipps Plaza in Buckhead, GA inviting her cast-mates to also host with her.

Best friend Dr Jackie and her husband were in attendance along with her husband Curtis. Dr. Contessa and her hubby Dr Scott Metcalfe and of course Dr. Damon Kimes was present. Special guestKenny Kenglomerate(Black Designer), Terry Shropshire (Editor Rolling Out), and a host of Dr. Heavenly’s high profile Dr friends all came out to support.

Prior to Dr. Heavenly’s screening Tyrese and Director Deon Taylor along with actress/co-star Naomi Harris hosted a screening in midtown at the world famous Black owned theater on Ponce De Leon with a host of tv camera crews and a grand red carpet as Tyrese has plenty to say urging everyone to go out and support this film.

If you haven’t seen Black and Blue please go while it is still in theaters. Purchase a group of tickets and send your teenagers. There are a lot of teachable moments in this film. You will not fall asleep or be disappointed. If you loved Training Day you will love this film. Shout out to Tyrese and Naomi who were definitely the dynamic duo! No spoiler alerts in this blog. Check out the photos after the break. 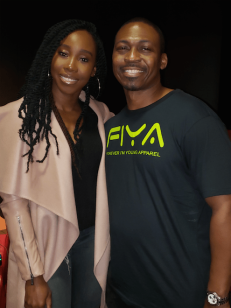 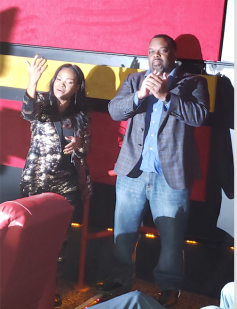