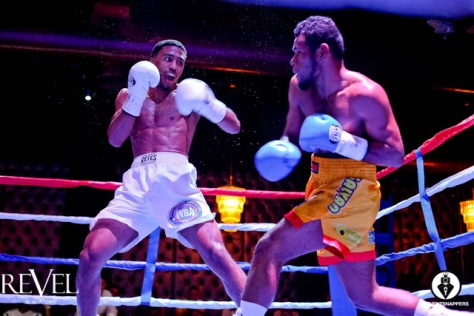 Boswell had good reason to choose Center Stage for launching his boxing series. It was the venue where he made a big splash in the boxing world. In 2008,  he captured both the IBF North American Heavyweight Title and the USBA Heavyweight Title with a second round KO of then undefeated World Contender Roman Greenberg(27-0), and became the leading contender for the World title. He soon added the WBC Latino Crown when he KOed top contender Owen Beck, and soundly defeated former World Champ Oliver McCall, adding the NABA Title to his belt collection.

In 2011, a severe shoulder injury prevented him from winning the WBA World crown in Helsinki Finland. He was ahead on points against Champion Alexander Povetkin when the doctors stepped in. The Boz underwent surgery and his medical team advised him to retire that year with a 35-2 record, one the best in recent heavyweight history.

Interestingly, Boxing wasn’t Cedric’s first choice of sports. As a High School All-American football player in Detroit, he was recruited by every major US college and accepted a scholarship to the University of Arizona where he was an outstanding wide receiver.

After a football injury sidelined him, Cedric’s amateur career began in Detroit where he became a member of legendary coach Emmanuel Steward’s Kronk amateur team. In a matter of years he became America’s top amateur heavyweight, then on to become a professional Champion.

As a promoter, Boswell promises the same dedication he devoted to his boxing career. Already he has recruited Atlanta’s top stars as well as international contenders for the April 11 event. In addition to the powerful Championship co-main events, six preliminaries with outstanding prospects will kick off the April 11 event.

Saturday Night Superfights is a sports/entertainment concept developed by Boswell and Worldboxe of Atlanta. Plans call for monthly events at Center Stage and other venues throughout the world. Tickets and VIP tables sales TBA.

Perfection @nouveaubaratl catfish & grits
@nouveaubaratl #FathersDay dance off and the winner isssss …. 🪘
Let’s go @nouveaubaratl #SundayFunday brunch is on and poppin!
I’m back home & the BossLady @ebonyakira is holding it down @nouveaubaratl #SundayBrunch #Restrictionslifted yesssss
It’s going down @nouveaubaratl @mimosajamatl Sunday #FathersDay
There is nothing more beautiful or tasty than cali orange and lemon trees #californialove❤️
Yesss🙌🏽🙌🏽🙌🏽 congrats #Bronxhotdogfactory @lashaundrew1 I hope all that training is paying off today. I want to see food pictures! Another one in the can @workwincelebrate Congrats !!!🎊🎉🎈 Repost from @workwincelebrate
Me & @petey_pitts #PasadenaNights #Family #SiblingPower
#FourSeasons #BeverlyHills
Follow The Producer's Channel on WordPress.com